Anthony still won’t let me post the sonogram pictures but I can tell you she is a crazy beautiful little girl with huge eyes and big lips like her momma. She kind of looks like a doll and I can't wait to hold her. We get to have another sonogram on the 13th so they can get the pictures she wouldn't hold still for the first time (she is going to be a handful!) so I hopefully will get to watch her throw a hissy fit again. OH! It finally happened. Baby girl kicked Cheech. It was awesome! He insists on trying to sit where my lap USED to be and ends up in this weird position that looks like a cross between a magician doing his “Voila!” and a gang member sprawled on a bench from one of those lock up shows on MSNBC. (Shut up, I love those shows..That is real reality TV drama people!) So picture my dog all sprawled half on my lap and half on my belly when baby girl decided she was unhappily smushed and gave a great big kick. Cheech jumped and spun his head around to look at my belly, expecting to see SOMETHING but just ending up confused. He got up and moved off the belly with a puppy sigh and settled next to me. Poor thing didn’t even get any sympathy because I was laughing too darn hard to comfort him! I really hope they can be friends after they get used to each other! 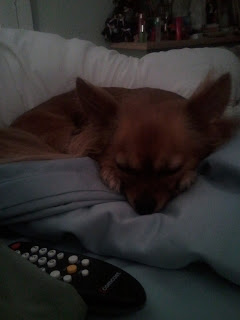 I am trying to get a handle on what her current schedule is so that I can be prepared for when she gets here but as far as I can tell she just wakes up about every 3 hours and throws herself a little party until she is worn out and then grabs some more z's. She is a lot like me in college. :)
Posted by Unknown at 6:43 PM